Andrew and the Fish that got Away 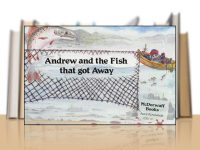 Andrew was known as the most selfish McDorwuff in the whole of the even farthest north. The despair of his wife, Morag, he will only help others provided it does not get in the way of his great passion, fishing. One spring morning, ignoring Morag’s complaints about the state of their postbox home and ignoring cries for help from his friends, he goes down to the beach to put the finishing touches to his boat and fishing tackle.

Andrew proudly leads the other fishermen out into the loch and soon catches a large fish in his net. But a mist comes down, and the fish begins to behave in a strange way, pulling the boat deeper into the mist before disappearing through a hole in the net. Then the boat begin sto fill with water and Andrew, fearing he will drown, calls on God for help before slipping and knocking himself out against the side of the boat.

He wakes to find himself being tended by Morag. He has been rescued by his friends, the ones he had spurned earlier. He feels ashamed and promises not to be so selfish in future.

And this promise Andrew did keep. So God smiled as he let the great fish swim joyfully out into the wide, wide ocean. It had served its purpose. And that was God’s way.

The McDorwuffs are a clan of small, stout Scottish people whose home is around the shores of Loch Laxford in Sutherland. They are rockherds, looking after the rocks and hills of the even farthest north.

The McDorwuffs have a special relationship with God, trekking up to the top of the mountain called Foinaven to talk about their problems and ask God’s advice. But if they don’t like the advice they’re given then generally ignore it!

These eight often funny stories in the series try to show something of the way in which God’s love works in the world. Some of the stories are loosely based on the parables of Jesus. They tackle themes such as greed, selfishness, pride, making difficult choices and how we treat others. The stories will appeal to all ages and especially to children aged from 5 to 9.

The stories have been turned into an 8 x 15 minute television series, available on DVD. Please contact me