Angus and the Christmas Present 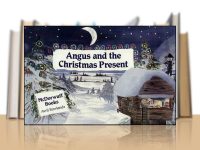 Angus McDorwuff has a problem. What should he give his friend, Fiona, for Christmas when he asks her to marry him and share his postbox home? He goes to God for advice.

Rejecting the sun as too hot, Angus asks for the moon and stars and sets off in search of them. In a shepherd’s hut an old McDorwuff is waiting to give him a parcel. The moon and the stars! But when Angus unwraps it he finds that the moon is tarnished and one of the stars has a broken point. He accuses God of cheating him. God tells Angus that he could not let him have the real ones for they are needed by everyone in the world. The star is needed to shine over the stable where his son is born at Christmas and the moon to light the way for the shepherds and wise men.

Angus is ashamed of his selfishness. He is also ashamed of the present, but Fiona tells him that it is the best she has ever had. She promises to mend them so that they will be able to hang them together in their house.

Angus looked at Fiona. High above them the clouds parted and the moon shed its bright, silver light, while the stars twinkled and gleamed. And God smiled and was glad that Angus would no longer be lonely. For that was God’s way.

The McDorwuffs are a clan of small, stout Scottish people whose home is around the shores of Loch Laxford in Sutherland. They are rockherds, looking after the rocks and hills of the even farthest north.

The McDorwuffs have a special relationship with God, trekking up to the top of the mountain called Foinaven to talk about their problems and ask God’s advice. But if they don’t like the advice they’re given then generally ignore it!

These eight often funny stories in the series try to show something of the way in which God’s love works in the world. Some of the stories are loosely based on the parables of Jesus. They tackle themes such as greed, selfishness, pride, making difficult choices and how we treat others. The stories will appeal to all ages and especially to children aged from 5 to 9.

The stories have been turned into an 8 x 15 minute television series, available on DVD. Please contact me