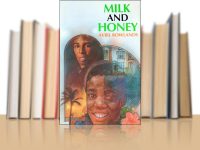 When Nelson and his family arrive in Britain, Nelson can hardly believe that this cold, grey country is their ‘promised land’. He is soon homesick for his relatives in Jamaica and for the sunshine, colours and way of life of the Caribbean.

It is 1958, and the Vincent family are among the first immigrants to Britain from Jamaica. They soon find out, though, that it isn’t easy to adapt to a new country. And although the British government asked them to come over and work, some people in Britain make it very clear that they don’t like immigrants.

As he gets used to his new surroundings, Nelson finds a friend in old Mrs Waterman. Wellington, Nelson’s older brother, makes lots of friends – though not the sort his parents would approve of – and he starts his own rock band. So they all begin to settle in; but as the long hot summer goes on, tensions rise around them until the situation explodes in violence.

‘Avril Rowlands makes an important contribution to the race debate in this powerful and disturbing novel.’ (Junior Bookshelf)