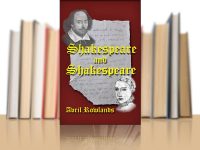 What is the truth about the authorship of the plays and poems attributed to William Shakespeare?  The names of over 50 possible contenders have been bandied around over the years, some with greater conviction than others.  But what if the real genious was much closer to home than anyone might think?

Shakespeare & Shakespeare explores the relationship between William Shakespeare, his wife, Anne Hathaway, and his patron, Henry Wriothesley, the Earl of Southampton.

The novel has its origins in the highly acclaimed one-woman play of mine, The Second Best Bed

Available on Kindle from www.amazon.co.uk