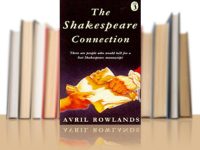 Cal doesn’t want to come over to England from America on a school trip and he certainly doesn’t want to have to learn all this stuff about Shakespeare. Okay, so Shakespeare was the greatest playwright in history, but what does that have to do with him?

It has everything to do with him when Cal finds himself transported back into the past. There is a mystery, and danger, and Cal is thrown into the middle of it all. At first it doesn’t seem important. How much would anyone care about a lost manuscript by Shakespeare? Not very much, Cal would have thought, but he soon learns how wrong he can be. Greed. Revenge. Power. There are all kinds of forces and all kinds of enemies that pursue Cal both in the sixteenth century and in the present day. Can the past ever be rewritten?