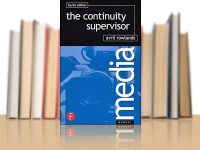 This book, now in its fourth edition has, since the 1970s, been the standard textbook on the work of the Script Supervisor/Continuity in film and television.  It is a practical guide to the basics of continuity, written to be of use both to those new to the industry and those more experienced in the job.

Although technological advances have wrought enormous changes in the television and film industry there is still a need for someone to be on set noting shots and doing the specialised job of watching for continuity when shots and scenes are taken out of sequence.  The method of cataloguing this information might now involve tablets or laptops with dedicated software, or it might be done, as in the past, with pen and pencil written on paper, but the techniques of what to look for and what to write down have remained unchanged from the days of the silent movie!

With the advent of shooting on computer files, the last section of the book on videotape formats, is now somewhat out of date, but there is much that is still extremely relevant today.

Available from www.amazon.co.uk or from myself